A sample of some of the Orkney Folklore and legends you will hear around the peatfire!

Two fiddlers
Two young fiddlers return home late on midsummer night after playing at wedding and are rather drunk. However, midsummer night is when Hill Trows come out of their mounds and they love music! The great stone door of the green mound opens and one fiddler enters – when he returns – has he been away for a day, one year, or one hundred years? 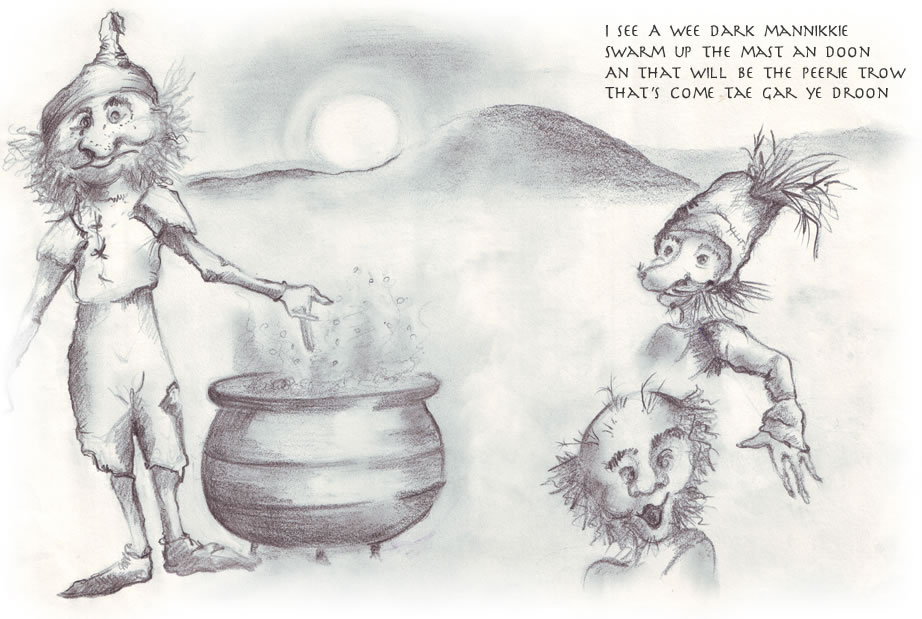 Sleeping giants
Legends of the dancing stones – Odin let his giants come to earth – however, they become too drunk to cross the bifrost (a three coloured rainbow – a bridge to Asgard, home of the Gods) Those that tried can be found dotted around Orkney as standing stones. Every New Years day, Odin allows the giants to come alive and sip water from the lochs – but only water!

Trowie Healer
A crofting wife from the island of Rousay is at her wits end with husband who has offended the Trowies by not respecting their presence on his land. He gave them no milk, no cheese and not even a sup of his first home brew. He is in the doldrums and will not gather the harvest or plant the grain. Despite encouragement from his brother, the minister and the laird, the husband continues to lay in his bed. His wife eventually decides to take matters into her own hands by taking a trip to the island of Shapinsay to visit the weird and wonderful Trowie doctor!

Selkie songs
A farmer is on the beach one day and sees a beautiful fair girl dancing next to a selkie (grey seal) skin. He steals the skin and promises her that he will be a wonderful husband. She lives with him and even has children with him, but her selkie skin is locked in his sea chest and she can be seen on a twilight night on the tidelands yearning to return to the sea….

Johnny Croy and the mermaid
Johnny Croy hears the singing of a beautiful Mermaid, but he startles her and when she drops her golden comb, he promises that she can have it back if he can court her. Though she agrees to marry him she tells him that in seven years she will return to Finfolkenheem and he must go too. She is a wonderful wife and they have seven children – but when the time comes for her to return to the sea, Johnny’s mother cannot bear to see the beloved youngest child go too and so she brands him with a hot metal cross. The distressed mermaid cannot lift the baby’s cradle from the earth and must leave with Johnny Croy and her remaining children, broken-hearted.

Assipattle and the Stoor Worm
The lands are plagued by a Stoor Worm of the sea who has eaten virgins and continues to cause mayhem. The bravest warriors are unable to kill the beast – but can Assipattle, a good for nothing boy who sits by the fireside, dreaming of heroes, defeat the great beast? Can he rescue Princess Gemdelovely, daughter of the king of the lands of Odin?